Our Friends from the streets

We never bought a pet, but we always had lots of them. Every one of them, if it is a cat, dog, or a bird has its own story. Everyone was special in its own way. All of them needed a home, a warm place, and a warm heart to help them to survive. Each one of them helped me as we helped them by one way or another. LoLyta My dog, she was my best friend. One day a guy called me, told me I have this dog I got as a present from a friend. My family will not keep her, would you take her or I will have to leave her in the streets. Before I saw her, I said "YES". She came to fill our house with laughter and love. She stayed with us a few years playing, running every where. She was always young with strong personality. One day she was not OK. We saw a vet who said it is a hopeless case and in three days she passed beside my bed while looking into my eyes and saying her last goodbye. She taught me what is the meaning of DEATH and losing a beloved. I will never forget her for she was my friend who in August 2005 was buried in the garden. Zaeroor, a long story, found him at the stables starving, dying. I brought him home not able to stand or open his eyes. He was only a kitten. I gave him all the love and care I can give. He lived but unfortunately he is blind in one eye, the blue eye, deaf, epileptic and have mild paralysis in the left half of his body. He is vegetarian!!  Happy and loves my father the most and licks like a dog. Aug- 2007 - died  23-sept. 2013 Zoerob, found him in the streets after getting Zaeroor and he was his right friend. They loved each other so much. When I got him, he only had one eye and with no apparent pain, thank GOD. He drove my father crazy, so, so naughty. HE was a CAT by all means which was the best in him, died after Zaroor by few weeks. Blakiee a very sweet boy who has been with us for 12 years and came with his brother, Fox who is living with a good family now. Blakiee never had the good nutrition a puppy should get as he was in the streets so he never grew as it should be and had always weak bones so from 2 years he broke his shoulder while running after a bird , but now there is no pain and he can walk well , Loves to talk !! he died in Europe. Beethoven, What a boy! We found him with his  brothers and sisters only a few days old, screaming in the 40 C temp. It was horrible we took them all and we started bottle feeding them while we searched for the mom. Some ( ...... ) people took the babies threw them out  and locked up the mom so they would not have to deal with the puppies. We got the mom, Rita, with a huge wound in her leg which healed nicly after treating and she cared for the 6 puppies, Beethoven, Hameedah, Bull, Neo, Sammra and Leo, until she decided she wanted to return to the hills so we let her go, leaving her babies old enough to live without her. We found homes for all of them except Beethoven and Hammedah who were a bit aggressive so they stayed with us.  Hameedah did not stay with us and Beethoven stayed, he scares any one come near (he has red eyes) and no one knows that he is such a cute, HUGE, baby. He is around 16 years old now

update on Beethoven he crossed the bridge in 2016 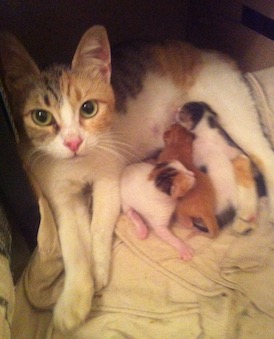 Anti, a very small sized cat, he mama left her and her brothers to us we raised, her she gave us 3 babies, then we had to fix her, she was a vert strong personality cat although she was so small but she managed to fight and be a lioness, my father loved her the most, she left us after an acute kidney failure at the age of 10 years approximately, in the 21st of December 2019