"My Own Black Beauty" 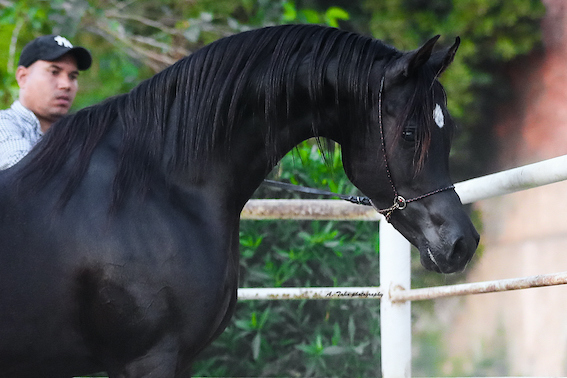 Waiting and waiting for the month to end to start having the new 2011 foals of the season ,, but strangely Malak decided she want to stop my misery and deliver 20 days earlier so she did …. And I got this call in the morning that she delivered a nice colt,, I was excited as usual but not sure how to feel because he is my first Petra colt and all I was wishing for is Malak to be okie as she was extremely sick the last year, me and my father went to see him and we fell in love instantly, commenting about how calm and sweet and great he seem to be,,

Yes he looked calm, nice, sweet and also great as a breading stallion for the future but mind you, I was never convinced that this little cute creature is that cute, there was something about these eyes and look that is telling me this is not a colt, this is a spirit of a martial art fighter, remember that little dinosaur in Jurassic park movie that was so so cute and then turned to be lethal ,, this was the case, in less than two days this colt that turned to be black from both grey parents,, was biting, rearing and ordering his mom to step aside when he wants to attack us ,, unless we shouted and this when she should interfere to help him in his great battle against the strange alien creatures with two legs ,,

And he turned out to be a warrior ,, and if I would have wished for a black stallion I would have never wished for better ,, I only hope he gets the idea that we are not in a battle fielded for a moment.. so I can show him we are not so bad !!!